Staging and having a Good Time 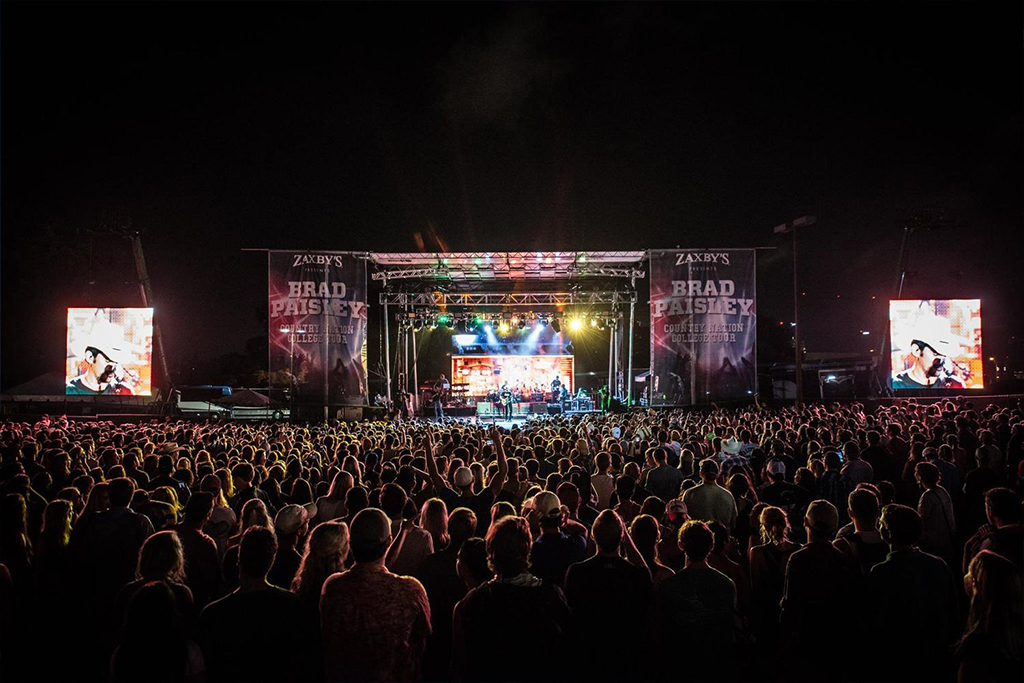 Sting wasn’t performing—he was just one of the guests, and he spent the evening dancing with his wife to a lineup that included Earth, Wind & Fire, John Fogerty, and headliner Bon Jovi.

The venue? A backyard in Greenwich, Connecticut. The event? A billionaire’s sixtieth birthday. “We had to use a barge and a crane to transport the SAM575, with the covered wing package, up through the New York waterways,” explains Brian Wander of Hoboken’s This Is It! Stageworks. “The barge has a crane built in, attached to one gigantic structure, to lift the trailers. It made the trailers look like matchbox cars, like tiny little toys. We took it up the Long Island Sound, working with the high tides—we did a lot of surveys beforehand to know how far we could get the barge in. Then the crane picked the stages up and landed them in the guy’s back-yard. There was no way to drive the trailers there from the front of the house.”

“We had a really hard time making that initial contact the first time we did it,” he recalls, “since it’s not what they do, and they don’t care so much about what we do in the grand scheme of things. But now, I call them up, and they’re psyched to come help me with whatever we need help with.”

Since that first voyage, they’ve become the go-to guys in the New York City area for a show that needs a barge and crane: they’ve now used the same method to stage Bob Dylan and Mumford and Sons (in two different years) on a pier-based park in Hoboken. More terrestrially, they’ve been involved with New York City’s Governor’s Ball for three years, as well as the Made in America festival in Philadelphia for four.

Brian Wander specifies two things about This Is It! Stageworks: one thing is that since their founding in 2004, their entire business has been built on Stageline products (three SL100s, an SL250, and an SL320—along with a joint venture with Stageline offering the SAM555 and SAM575). The other thing is that they have a good time doing their jobs. Brian and Pierre Rompré at The Meadows Music & Arts NYC.

“Yeah, we’re a business and we take things seriously,” he says, “but there’s no reason why you can’t have fun. We definitely enjoy what we’re doing.”

It’s sometimes been hard for Wander to not have fun. His company set up the SL250 in Brooklyn for the set of a day of concerts that became the 2006 film Dave Chappelle’s Block Party, boasting rap legends Big Daddy Kane and Kool G Rap alongside (among others!) hip-hop and neo-soul stars Mos Def, The Roots, Kanye West, Jill Scott, and the reunion of the Fugees.

“I was still making my transition from the production world,” says Wander, “so I got hired as the assistant staging supervisor. Not only did I provide the stage, but I was also a technical stage manager dealing with the bands onstage during the show. I was actually onstage in the background—I’m in a bunch of shots! I was there all day. It was amazing.”

Other than the time he got to spend with Dave Chappelle, whose work he didn’t know beforehand and whom he now describes as “the funniest man on the planet,” the standout memory was sitting shoulder to shoulder on a drum riser backstage next to neo-soul siren Erykah Badu, who was to perform. “We’re chatting: she’s lovely! And then she takes her wig off—and I never knew that crazy afro she had was a wig!” he laughs. “I always thought it was her hair! I told her this, and she laughs. I say, ‘Can I try it on?’ She says, ‘Yeah!’ and hands me her wig. It was hysterical.”

Part of the secret to having a good time, Wander says, is keeping up to date in small increments so there’s never any need to worry about anything catastrophic.

“We take care of all our equipment and trucks regularly. We have a mechanic who does that on a regular basis. It could be as easy as changing the oil in the motor that runs the hydraulics, or adding hydraulic fluid. When our guys come back from a gig, they fill out a report or tell someone if there’s a problem. It’s an ongoing thing, and maybe it ends up costing the same in the end—maybe a little bit less? But the amounts of the expenditures aren’t as high. You don’t get hit with that major repair that you need to do so the stage doesn’t explode!”

Repairs cost money, he says, but Wander underlines that the units make money—which is the point.

“We’ve created a whole business out of these units,” he says. “We’ve got 14 full-time employees, and when we were busy last year in season we got up to 35 people on our payroll. We couldn’t afford to pay these people if we weren’t bringing the revenue in.”