THE PEOPLE BEHIND STAGELINE POPULARITY 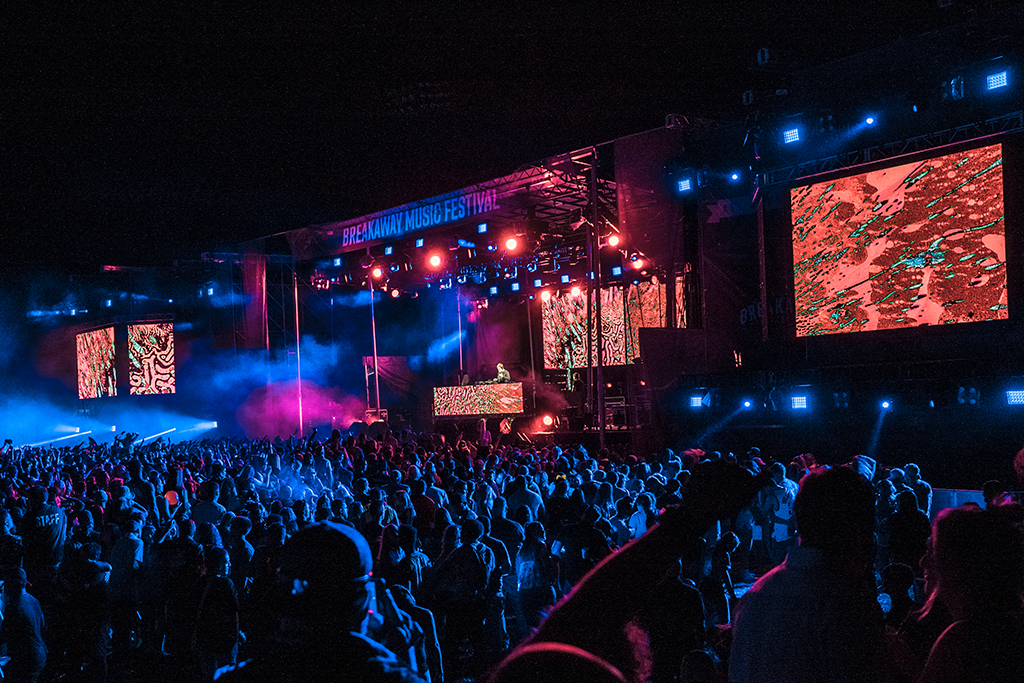 The Breakaway Music Festival, boasting some of the biggest hip-hop and EDM names in the industry, has made a name for itself providing a stage to the likes of Kendrick Lamar and Wiz Khalifa. The stage in question is the SL320, and the team behind it is Technotrix, located in Chicago, Illinois.

In many ways, says Technotrix’s Andy Kuhlmann, the company decided to buy a SL320 for obvious reasons: weather protection. In previous years, Breakaway has had stops in Columbus, Ohio; Grand Rapids, Michigan; Nashville Tennessee, and Charlotte, North Carolina. The festival’s 2020 season has tentatively booked dates running from late August to early November, and including new locales of Washington, DC and San Diego, CA. While that’s an exciting range for a producer to service, it also means preparing to deploy the stage and run the show in the South, the Midwest, and now Southern California. With that comes weather uncertainty, and Technotrix was getting tired of having to work around rain delays. They were ready to invest in an upgraded stage, and the SL320 caught their eye.

“The 320 was a better product—and it has a lot more weather protection,” Kuhlmann says. “We needed to have a better service offering.”

At the same time, he says, Breakaway likes to put up plenty of lights and scaffolding for video walls.

“Most of our uses are for outdoor concerts,” Kuhlmann explains. “We do a lot of accessorizing with [the 320]—building wings or scaffolding structures to support lights and video walls to give you that better, larger first impression for attendees coming to your music site.”

The idea to invest in a Stageline unit wasn’t abstract. Rather, Kuhlmann credits an encounter with Stageline mobile staging technician Jonathan Peloquin during one of Chicago’s Riot Fest concerts.

“We knew about Stageline and were intrigued by it, but we weren’t ready to make the jump yet,” Kuhlmann remembers. “Jonathan was a SAM555 tech at a show we did together and I had a great experience with him. He talked really highly about Stageline. I thought, if their employees think this highly of the company and the product, it’s got to be the way to go. We did some further investigation to make sure we had enough business, and we made the jump and purchased the 320.”

Peloquin is just as excited to remember meeting Kuhlmann at RiotFest, where the SAM555 was the only Stageline unit out of five massive stages.

“Me and Andy were working on the Stageline unit, but the other stages were all from competitors,” Peloquin remembers. “During the load-out, we crushed it. I remember the Crew Chief came up to me in her golf cart and said, ‘Are you done with all my guys? It’s not even a half day!’ She had to send them to the competitor so they could finish on time. And the competitors—even though their stages were slightly smaller and slightly weaker—they finished about seven at night, while we were done at noon! I’ll always remember that. Everybody looked at me sideways: suddenly I was that guy with that pop-up stage. Me and Andy, we crushed it so hard we made everyone look bad!”

Kuhlmann concurs, saying, “I always felt like Stageline products are a little bit more refined, and now that I’ve seen so many mobile units from Stageline, you can see as every year goes on, they’re a little better, there’s a little more capacity, and things work better.”

For Jonathan, that first meeting with Andy was just as important for what it wasn’t: Jonathan wasn’t trying to sell Andy anything. They were just two people passionate about events and staging who happened to cross paths in the middle of a hectic festival.

“We try to build relationships with people who aren’t clients,” Peloquin says. “Andy wasn’t a client before—he was a guy at a company we worked with, but the relationships we develop bring a lot of visibility to Stageline. We try to stay in touch with everyone we work with, from the smallest business that might be taken for granted with another company. We try to develop a network web of relationships. With Andy, it’s been nearly ten years, and we’ve crossed paths maybe once since then, but we talk like it was yesterday. That’s something!”