“For the last song of the show, for our little finale, we fired 400 pieces of fireworks from the stage, and 200 feet behind the stage, we threw in another 500 pieces,” explains Evenko’s Karl Gaudreau. “Those last 500 pieces were the last 15 seconds of the show.”

He chuckles. “It was a pretty intense last song!”

The intensity was no accident. Evenko began planning the show at the beginning of the New Year. It was the apex of the fifth annual Ilesoniq EDM festival, and Evenko wanted it to be something people would remember.

“It was a pretty big setup—one of our biggest we’ve done in our fourteen years,” Gaudreault says. “We loaded seven hundred moving lighting fixtures on the roof. We hung 1,000 pieces of LED screen tiles. I’m pretty sure we hit the limit of the stage—it was pretty close to the limit! We roughly covered the entire back wall and the two flybays. It was pretty big.”

But that wasn’t quite enough for it to stand out. Gaudreault and his team talked about how to differentiate themselves from what other EDM festivals were doing. Last year’s Ilsoniq was focused on the central portion of the stage, but for this show they decided that to set themselves apart from other festivals, they’d go above beyond quality video displays. 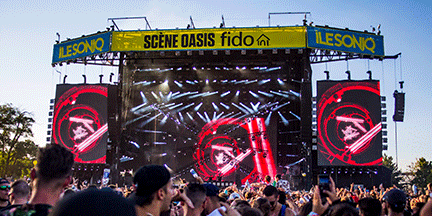 ” Every little place we found to hang something, we hung something.” -Karl Gaudreau

“This year we decided just to do a really big lighting and power show,” he says. “Let’s push the limit. We still put up a lot of LED walls up, but the main idea was to focus on lighting and SFX instead of doing a video show. We decided to increase the amount of money we put on pyro, so we worked a lot with Stageline to hang fire, pyro, and cryojets all over the place. On top, on the sides. Every little place we found to hang something, we hung something. We put pyro on top of the stage, on the top banners.”

The line of flamethrowers running the lip of the stage was certainly hard to miss when they were firing 45-foot flames straight up.

“That was pretty cool with the SAM750,” he says. “Since you have the high trim, you’re able to use that kind of thing. It was 285 tanks of C02! We used automation as well—half of the lighting rigs were moving during the show. Half of the truss was in motion from the floor to the roof, in 35 seconds. It was pretty intense.”

Evenko’s known for its major events at Montreal’s Bell Centre, and Gaudreau says what he likes about the SAM750 is that it has a similar rigging capacity as that venue, but sets up outdoors.

“Our home base is the Bell Centre, so it’s like working at home!” he says. “When we started to work with Stageline to get the stage up, we started to realize just how much STUFF we can do with this stage. With the SAM750, the roof is so strong. We have roughly the same spec as we’d use to hang a show at the Bell Centre. We can hang a lot of weight—and the way the stage is built, it’s so easy for us. After five years we know the ropes pretty well!”

Being an expert in working with the 750 has played in Evenko’s favour—after the Chainsmokers’ Ilesoniq show, the group wrote to tell Evenko it was the most beautiful event they’d had all summer.

“We felt like we’d done something pretty cool,” Gaudreau admits.

And for next summer? They’re planning already, but all they know is that it will be a new site and there will be two 750s involved, side by side. They haven’t picked the location and angle for the stages yet—Gaudreau says that has to come first.

“Later, we’ll decide what goes on the stage!”